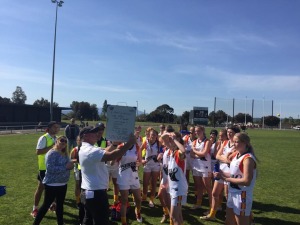 After six intensive weeks of training, the girls were asked to trust that their training and hard work would all fall into place when they needed it come game time! With nearly half the team being first-year footballers, the emphasis of training had been on kicking skills, game sense drills and on learning positional roles and game structures.

While warned of the physical intensity they would face, for some it was initially a little overwhelming in the first few minutes until they settled into the style and intensity they were up against. With strong midfielders, Bridie Kennedy, captain Parris Stahl and 14-year old Bella Shannon, with big Caitlin rucking, the girls quickly took control of the game, winning majority of centre clearances and boundary throw-ins.  Zoe Mitchell, best-on ground, was inspiring, with perseverence and second and third efforts at every contest and hitting her targets with style and grace. When Caitlin landed awkwardly after a marking contest, injuring her knee and with a fracture to her wrist, Emily Rylance stepped in capably, dominating in the ruck and across the ground.

The Stingrays managed to keep majority of the game in their forward line using extreme forward 50 pressure through the zone structure they worked on. The forward line led by Imani Frances, Sam Ryan (before she injured her ankle), Ruby Wilson, Tylah St Anne, and with strong overhead marking from Montana Macfarlane and Charlotte Seedsman, provided many opportunities at goal.  Whist inaccuracy showed plagued some, the players' intensity to trap it in and get another crack at it, deserved great merit.

The backline was geared and ready to compete but the relentless defensive pressure right across the ground, particularly from wingers, Lauren Field and Ruby Wilson and a backline that included Kamesa Sibosado, meant that the opposition team's forward entries were few and far between and was salvaged through strong marking from Tayla Prentice at full back.

The girls worked really hard on holding their positions and playing their role for the team.  Their transition from defence and the game structures to keep the forward line open worked extremely well, leading to the team being described by the opposition coach as "a very well-drilled side".

Against a strong tackling side from the North East, the girls started out slowly, searching for the momentum from previous day's match. But it wasn't long before outstanding ruck tap-outs by Emily Rylance, Bridie Kennedy and the experience and communication of the onballers, led by captain Parris Stahl and Zoe Mitchell, helped clear the ball consistently from stoppage situations.

Support and tackling pressure in the backline were tested a little today but the back line prevailed, conceding only one goal for the match. Tayla Prentice, Olivia Barrett, Ashleigh Gyurcsik and Keeley Davenport showing strong physical presence and confidence with courageous work and strong tackling and shepherding efforts through the centre and wing area from Jasmin Mandile, Rubi Sammut, Jaymie Lillie and especially young Shelley Heath.

The forward line players were challenged in those swirly conditions early on,  but strong leads and marking from our forwards, Suede Croad, Imani Francis and Kamesa Sibosado made it hard for the North East to block the space created through dummy and target leads. The ability to place the ball in front of the players created opportunities at important set shots for goal with well-placed kicks from the flanks. Lauren Field and Catherine Dunne kicked 4 early goals between them with great passing from Ruby Wilson help set the early dominance up forward.

With good scoreboard pressure early on created the freedom to be able to move many players around into different positions. Tayla Prentice was shifted from full back to midfield and demonstrated her versatility and strong decision-making and technical skills. Little Emma Pugh moved to on-ball showing everyone in the midfield just how you lay a tackle and Izzy Woinarski demonstrated strong physical presence throughout the game and fought hard to win the footy whether in the backline or the forward line.