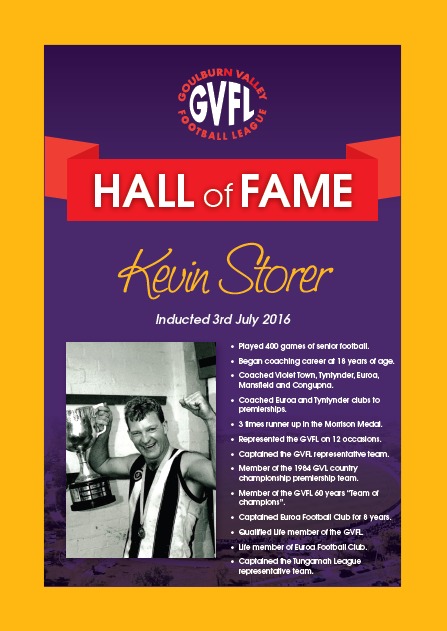 High in the Strathbogie ranges lies the village of Tolmie.

The Tolmie Football Club which once played in the Benalla and district League was referred to as “The Snowmen” as they often played the game with snow on the ground.

Our next inductee came from Tolmie, however the local club had gone out of existence by the time he became of football age, so it was a 40 minute trip for Kevin Storer and his family over slushy dirt roads to play with the Mansfield football club when Kevin was sixteen. He was selected in the senior team immediately in 1974.

After two seasons at Mansfield Kevin gained employment with Australia Post, a company he would work for over the next 40 years. His appointment was at Violet Town and when he arrived, he found that they were without a Football coach. After much urging, Kevin Storer became coach of Violet Town at 18 years of age. He coached them into the finals in 1976 and 1977 before being transferred in his employment to Benalla. He played the next two seasons with Benalla and then shifted to Euroa in 1980. It was at Euroa where Kevin would really make a name for himself. His strong enthusiastic play as a ruck rover took the eyes of the GVFL selectors who named him in the GVFL representative team. Kevin relished championship football, he became a popular and well respected member of the GVFL squad and played his heart out for the League. He represented the League on 12 occasions and was given the honour of captaining the GVFL team. He was a member of the 1984 GVFL Country Championship premier team.

As captain of the Magpies over 6 seasons Kevin led the way and showed the young Euroa lads how give their all for their club. His energy, enthusiasm and natural ability made him a star player who was greatly loved by the Magpies fans. He was runner up in the Morrison Medal voting three times and third once.

In 1987 he transferred to Swan Hill and became the Captain/ Coach of the Tyntynder Football Club. It was a successful premiership year for Tyntynder. He also met his match in life when he met Mandy during his time at Tyntynder. However his heart was still at Euroa and he returned to the Magpies in 1988.

He was back coaching Euroa in 1989 and the team made the finals. Kevin was delighted with the talent at Euroa, with local names like O’Bree, Brodie, Tate and Nipper Harvey playing, he was confident of success.

Kevin led the Magpies into the 1990 Grand Final against Rochester at Deakin Reserve. The tigers were 7 goals ahead mid-way through the third term when the magpies rallied to win the game by 17 points. It was a triumph for Storer who had 29 possessions and led the way to a magnificent victory. It was his most satisfying football experience.

He spent the next year as a player with Euroa and then returned to where it all began as Captain/ Coach of the Mansfield Football Club for two years. He finished his playing career playing with two of his brothers, Pat and Brendan at Congupna. The first time the three brothers had played in the one team.

Kevin moved back to Swan Hill as the Area Manager with Australia Post, but couldn’t keep away from football. He took up umpiring and also coached junior football.

Tonight we induct a man who inspired people and gave his all to his players, clubs, Leagues and the game he loved. He was selected in the GVFL 60 year team of champions. We salute Kevin Storer for his successful football career and welcome him into the GVFL “Hall of Fame”