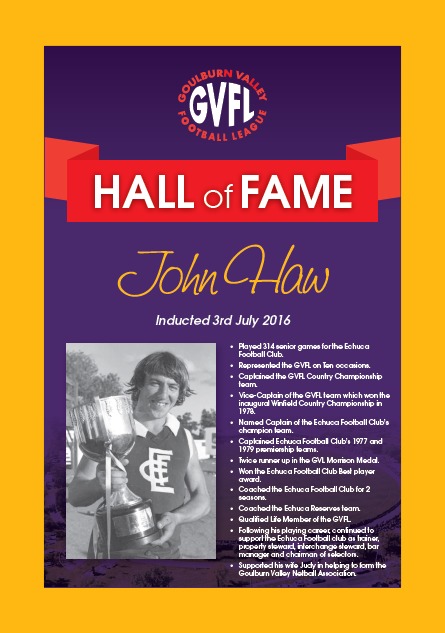 In 1974 The Echuca Football Club entered the Goulburn Valley Football League. GVFL fans were mesmerised by a player who seemed to be in the play all the time and picked up kicks everywhere. They eventually woke up to the fact that there were actually two players who looked the same as they were twins. John and Neil Haw were to become stalwarts of the Murray Bombers and tonight we welcome John Haw into the GVFL Hall of Fame.

John and Neil were born to Strathallan farming family, Herb and Jean Haw who would themselves both become Life members of the Echuca Football Club. Herb Haw would also become a strong advocate for Echuca and serve as a wonderful Vice President of the GVFL.

By the time Echuca had entered the Goulburn Valley League from the Bendigo League, John had already become a top player after joining the Murray Bombers from the Bamawm Extension Club where he played 54 games, commencing as a fifteen year old. At 19 years of age he joined the Echuca Club under the famous coach Graeme Arthur who was to be a huge influence on John’s football career.

He commenced as a half back, but Graeme Arthur soon appreciated his class and moved him into the centre position. John thrived on the tougher responsibility and performed brilliantly on a consistent basis. He soon enjoyed success as a member of Echuca’s 1977 and 79 premiership teams.

1978 was a big year for John or “Joe” as he became known, not only was he the winner of the Echuca Best Player award, but he was called upon by the GVFL selectors to represent the League. John was a vital part of the GVFL team which won the inaugural Winfield Country Championship under the coaching of Echuca identity Bob Allison.

It was obvious that John loved playing championship games alongside the best players in the League. He dedicated himself to the games, he performed brilliantly and constantly drove the ball forward into the GVFL scoring zone. He showed by his after game smile how much he cherished that Country Championship.

In total he represented the GVFL on ten occasions, 9 as vice-captain and then captained the League. John promoted Country Championship football well at Echuca and enthused other Echuca players to make themselves available. Hence Echuca was always well represented in those GVFL teams.

The hallmark of John’s football was his consistency. Week after week he would drive the Murray Bombers forward and set a wonderful example to the younger players. He suffered very few injuries in his total of 314 senior games and only missed six games during his wonderful career.

On reaching his 200 GVFL games he became a qualified Life Member of the League. John Haw played at the Echuca Football Club from 1971 through to 1985. He captained the Club for 10 years, coached the Reserves and coached the Senior Team in 1983 and 1984.

During his playing career he was given wonderful support by his wife Judy, who was one of the major instigators in forming the Goulburn Valley Netball League.

Following his retirement as a player it wasn’t a surprise that he couldn’t stay away from the game and he continued to support the Echuca club as a trainer, property steward, interchange steward and bar manager.

One runs out of superlatives when commenting on the wonderful playing career and football involvement of one of Echuca’s favourite sons.