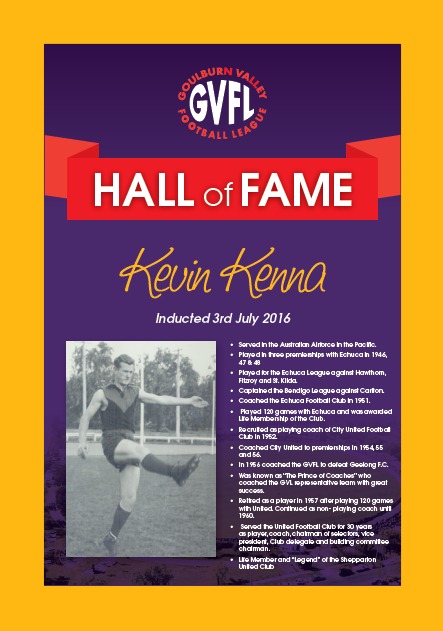 The GVFL tonight inducts into the Hall of Fame a man who became known as “The Prince of Coaches” however he didn’t get to play the game until after he had served his country in the Airforce in the pacific theatre of war.

Kevin Kenna grew up in Echuca and on his return from war service, at 22 years of age commenced playing football with the local Echuca team in the Echuca League. He immediately showed great ability as a player, and helped Echuca win premierships in 1946, 47 and 48. He also represented the League against Fitzroy and St. Kilda. He stayed with the Echuca club when it transferred to the Bendigo League.

Kevin loved the major League competition and showed great skill as a Centre Half Back and a centre man. He was selected to represent the League against Hawthorn and captained the Bendigo League in a game against the Carleton Football Club. He was invited to play at Richmond, but preferred to stay in the country.

In 1951 he was appointed coach of Echuca and after playing 120 games with his home club was recruited by City United Club president Travis Dobson to coach the Demons. So Kevin and his new wife Mary moved to Shepparton in 1952 and commenced a 30 year unbroken association with United. The town of Shepparton was previously well known to Kevin as he had commenced his Airforce training at the Shepparton showgrounds.

Kevin had a massive impact on GVFL football, he was a wonderful coach who didn’t stand any nonsense and improved the team through the concentration on team work .He had immediate success, coaching United into the Grand Final, only to be beaten by Tatura.

The next year – 1953 United met Tatura again on grand final day and drew the game. Tatura won the replay the next week.

Kevin had developed a team that would give him fantastic support. The players called him “Grumpy” as he instilled the discipline of fitness into them. They recognised his brilliant knowledge of the game and enjoyed his dry sense of humour. United won the next three premierships defeating Tatura in 1955 and Mooroopna in 1956 and 57. Kevin’s coaching mantra of fitness, team play and team effort had paid off.

The GVFL named him as League coach and he coached the League to a historic win against the Geelong Cats in 1957. He set about to repair the GVFL’s reputation in Country Championships and succeeded when the League won its way back to the A Grade competition. Kenna had become a “master coach” who had earned a wonderful reputation. He had concerns about the GVFL player selection process and demanded a place on the selection committee if he was to be the League’s coach.

After playing 120 games with United, Kevin retired as a player in 1957 but stayed on at United as non - playing coach until 1960. He did however return to the coaching role at United in 1965 to help the Club out after their coach had left mid - season.

Following his incredible playing and coaching career, he could have been expected to have a rest from football, but his love of the game and the United Club saw him serve as chairman of selectors, vice president, club delegate and chairman of the building committee which oversaw the erection of new clubrooms.

It is no surprise that he has been named as a “Legend” of the Shepparton United Club.

Kevin Kenna has thoroughly deserved the accolades he has received. He has left an indelible mark as one of the greatest coaches of the GVFL. Tonight we welcome the “Prince of coaches” - Kevin Kenna into the GVFL Hall of Fame.