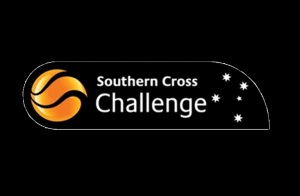 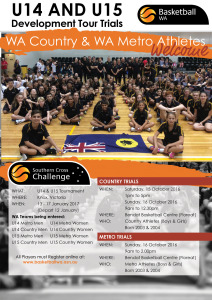 Each year in January Basketball WA sends selected U14 and U15 athletes on a Development Tour providing them with the opportunity to compete against development squads from other States at the Southern Cross Challenge tournament in Melbourne.

This tour allows coaches and junior WA athletes to gain experience in high level tournament play preparing them for potential involvement in State Teams in the future.

Teams represent both Country and Metropolitan WA in the U14 and U15 age group for both men and women.

Cost: The approximate cost of attending this Tournament will be in the order of $1800 +/- per Player.

TEAM PREPARATION:
To be confirmed.

TEAM COMPETITION PRIOR TO TRAVELLING IN JANUARY 2017:
Teams will be entered in the U14 or U15 BWA Smarter than Smoking State Championships which will be held in November/December 2016 at the Bendat Basketball Centre.

Dates for the Basketball WA Smarter than Smoking State Championships for Under 15's are to be confirmed at a later date.

Dates for the Basketball WA Smarter than Smoking State Championships for Under 14's are to be confirmed.

Participation in the Development Tour teams takes priority over participating in local Association teams in these Championships.

TRAVEL ARRANGEMENTS:
To be confirmed

NB: APPLICANTS  DSR Travel Subsidy Applications - Players traveling to the 2017 Southern Cross Challenge are not eligible to apply for the Athletes Travel Subsidy through the Department of Sport and Recreation as the tournament is not a Basketball Australia sanctioned event. It is run by Basketball Victoria and is a development program, not an Australian Junior Championships

To register to trial for the Southern Cross Challenge click the link below (please note, athletes must be born 2003 or 2004 to be eligible).

COACHES AND MANAGERS:
Each team will be accompanied by a Coach and a Manager. Expressions of interest are now being sought for these positions. To apply please click on the link below.

SELECTIONS
Trials are held each year for those wishing to be selected into one of the touring teams.

Trials will be held for this year's Development Tour teams at the following times and venues:

CONTACT DETAILS:
Information regarding the trials for the Development Tours can be obtained from: