Bulldogs get another Rising Star Nomination 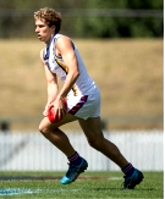 Abe Davis made his senior debut last weekend for UNSW/ES against Sydney University in Round 2 after a solid year in the U18’s last year.

Abe is a Sydney Swans Academy player and very highly regarded by the Swans coaching staff. Tall, athletic and possessing great skills by hand and foot, Abe has an incredibly bright future ahead of him.

Playing across the half back line against Sydney University on the weekend, Abe racked up numerous possessions, and barely lost a contest on the day, soundly beating his direct opponent. Abe provided a lot of rebound out of the backline and had a sure set of hands when the football was in the air.

UNSW/ES are excited about the prospects for the local Maroubra boy from the Eastern Suburbs of Sydney – watch this space!