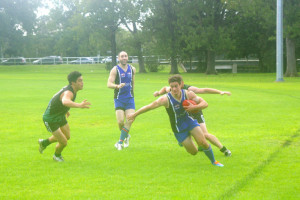 By Dave Hourn and Dennis Rider

The Division Four team kicked off their season against the UTS Bats last Saturday at Mahoney Park. The bats have been exceptionally strong over the past couple of years and unlucky not to have won a flag or two. After some good performances in the pre season and some upper grade recruiting this year was shaping up as no different so it was a great first up test to see where our guys are at.

As always it is tough to get the combinations right first up but the first quarter showed some great signs. After trading early blows the Bulldogs got right on top of the Bats kicking the final three goals of the first quarter, including a neat mark and goal from 50 out to defender come forward Adam Powell. The score at quarter time 4.2 (26) – 2.3 (15) with the doggies to the good.

The second quarter couldn't have started better when only a couple of minutes in Troy Nicol showed the importance of keeping his feet in the goal square and was duly rewarded with a goal that stretched the lead to 17 points. But that was to be the end of the UNSW-ES scoring for the first half with the bats experience starting to shine. Jacob Corlis stood tall at the back, pressuring their full forward and making every possession count. However UTS piled on the pressure and – more importantly - five unanswered goals to head to the main break up 7.6 (48) – 5.2 (32).

The break gave some much need respite to the boys and they came out with renewed energy and the experienced midfield duo of Calvin Cain and Tim Dickson proving particularly effective around the stoppages. With both teams trading two goals each the Dogs went into the final break just 13 adrift and with a real chance of coming home with the points.

But it wasn't to be and the fire power that saw UTS finish as the second highest scoring Division Four team in both 2012 and 2013 became too much for the Dogs and they put on six goals to one in the final term. The final 7 goal margin, was a harsh reflection of a very encouraging performance, where the Bulldogs backline battled their hearts out all day, against a team that will definitely be there at the pointy end of the competition. Next week our Division 4 boys travel south to meet unknown newcomers Wollondilly Knights, where coach Dennis Rider will have the Bulldogs fired up to sing the song on the bus ride home!