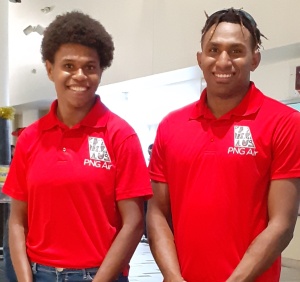 Triple and Long Jump National Record holder Peniel Richard returns to the USA this week to complete his studies after a break of two years. Richard has secured a full athletic scholarship to attend West Texas A&M University in Canyon ,Texas where he aims to complete his degree in Kinesiology.He becomes the fourth PNG athlete to attend this school after Sharon Kwarula, Rellie Kaputin and Theo Piniau.

“Peniel decided to return home in 2017 for his own personal reasons said Athletics PNG President Tony Green but his consistently good performances in big meets since then has resulted in this great opportunity for him to return to the USA to complete his studies and of course continue his athletic career. WTAMU is a great school and we are very thankful to Head Coach Matt Stewart and his staff for looking after our athletes so well.

Richard first set the national record by jumping 15.35m in the USA in 2017 and improved it to 15.45m when winning gold at the Pacific Mini Games in Vanuatu. He further improved it to 15.51m this year at the Apia Games ,missing out by just 2cm to his great rival Eugene Vollmer from Fiji, himself a former USA College athlete.Vollmer also edged Richard out of Gold at the 2015 Games by just 5cm.A versatile athlete, Richard won the high jump silver and long jump bronze in Apia last year and also won the high jump silver in Vanuatu 2017. His 2015 Games campaign was cut short after he injured himself in the Pole Vault.