New Talent on Show In Kimbe 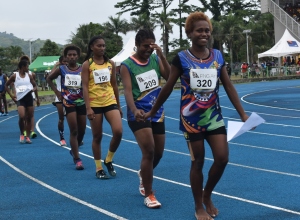 Some new talent was unearthed at the PNG Air National Athletics Championships held over the weekend of 16/17 November at the Sasindran Muthuvel Stadium in Kimbe. The most eye catching performance came from Lenia Gilis of West New Britain who clocked 60.28 seconds to win the Under 16 girls 400m. Considering that Gilis only turned 14 years of age in July this is a truly outstanding time. Seventeen year old Scholastica Herman a Grade 9 student at Maltech Secondary in East New Britain won the womens 1500m in 5min 10 seconds on Saturday afternoon and followed this up with an impressive run in the 3000m on Sunday.The crowd was entertained to a fine race in the 3000m with early leader Mary Tenge being overhauled by both Herman and crowd favourite the diminutive Dominica Kakapa from WNB in the closing stages. Young Emmanuel Anis from East Sepik impressed in the open mens 100m clocking the second fastest time in the heats with a wind assisted 10.77 seconds. Tovetina Tuna of NCD , son of one of PNG’s most successful ever athletes Takale Tuna clocked a very impressive 11.01 seconds in the heats of the 100m on Saturday also with a little wind assistance. However conditions were not so favourable for the 100m finals in the afternoon after a heavy down pour and all the athletes posted slower times in the finals, including Toea Wisil who clocked times of 11.76 and 12.01  respectively.

A total of around 300 athletes participated in the two and half days event which kicked off on Friday afternoon after a nice opening ceremony attended by both Governor Francis Maneke and Minister for State Enterprise Sasindran Muthuvel. Both pledged their support  to the development of the Sport of Athletics in the Province. Athletics PNG President Tony Green thanked the Local Organising Committee headed by Nolene Pidik for a fine job in hosting the event as well as Sponsors PNG Air , Lae Biscuit , Panamex , Guard Dog Security , Padi Limited and  PNG Sports Foundation. Some quality races were also seen in the open division with the mens 200m the highlight. NSI based ENB athlete Michael Penny was a clear winner with an impressive 21.53 seconds with Shadrick Tansi (21.71)  holding off David Guka for second place and both Daniel Baul (4th) and Linus Kuravi  (5th) right behind them. Pacific Games Gold medallist Leonie Beu was also in good form winning the 200m and 400m events and placing second to Toea Wisil in the 100m. The highlight of the mens middle and long distance events was Sundays  5000m with James Kuadua tracking Siune Kagl for most of the race as he did on many occasions earlier this year only for Kagl’s superior finishing speed to be the telling factor in the end. In the field events National Record Holder Lakona Geraga demonstrated his class in the Javelin with a throw of 57.33m to win by over 10metres from Samuel Pai of WNB. The womens field events did not attract a lot of competitors but the U18 and Open mens jumps were keenly contested. New Irelander Moses Darius currently based in WNB won the mens high jump with 1.85m with Kenneth Harrison of ENB coming out on top from a field of 14 in the U18 mens long jump. The Championship brings down the curtain on what has been a long and very eventful season for PNG Athletics and the focus now switches to 2020.