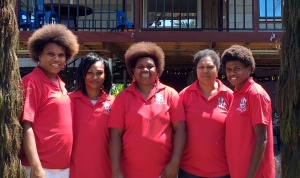 President Tony Green and Secretary Philip Rehder were both re elected unopposed at the  Athletics PNG Special General Meeting convened in Kimbe last month. However all of the other five members of the Committee gave notice that they would not seek re election for various personal reasons , paving the way for new office bearers to be elected. Josepha Wailoni from Port Moresby  was the only nominee for the position of Vice President and takes over the role from Gordon Kapak. Betty Burua (ENB) was the only nominee for Treasurer and accepted the nomination, replacing Nola Peni.There was an election for the remaining three positions for committee members and the successful candidates were Monica Henao (Lae) , Wilson Malana (WNB)  and Malcolm Limbai (ESP)

President Green thanked the outgoing Committee members for their contributions and support  over many years. The retiring members each pledged to continue supporting the work of APNG in whatever ways they could. The meeting considered the President’s report in detail and discussed the 2020 Competition programme which includes the Melanesian Championships in Port Moresby (June) and the PNG Games (November). The meeting agreed that the Regional Championships be held in the first half of the year , as a lead into the June National Championships. There will be no large teams going overseas next year and the focus will be on the domestic programme and identifying new athletes to strengthen the National squad ahead of the 2021 Mini Pacific Games and 2023 Pacific Games. The 2020 Calendar of events is currently being finalised and will be released as soon as the dates of Regional Championships are agreed with the respective Associations.