US Based Athletes Graduate 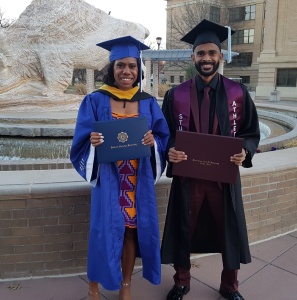 Athletes Theo Piniau and Poro Gahekave both graduated from their respective Universities in Texas last Saturday.Proud parents Graham and Alice Piniau flew to Texas for the big occasion at West Texas A&M University in Canyon, the same school from which Rellie Kaputin graduated last year. Athletics PNG President Tony Green and athlete Annie Topal witnessed Gahekave’s graduation at Lubbock Christian University which was on at the same time and the trio then visited the Piniau family in the afternoon.

President Green congratulated both athletes on behalf of Athletics PNG and thanked Mr and Mrs Piniau for their support which enabled Theo to complete his degree after taking a break in 2017/2018  to focus on athletics. Green also thanked the Oceania Foundation for giving Theo the opportunity to study in the USA with a two year scholarship from 2013 to 2015. Gahekave started a year later, in august 2014 with support for one year from the Go for Gold Programme leading up to the 2015 Pacific Games and resumed her Junior College studies in 2016 under a private arrangement before securing a scholarship to Lubbock Christian University.

Green said that APNG had established a very good relationship with West Texas A&M University where Head Coach Matt Stewart has been very supportive of the PNG Athletes. He was also very impressed with the set up at Lubbock Christian where the support to students is amazing.” Its clear that the tutors and admin staff genuinely care about their students and the atmosphere there is highly conducive to success for student athletes.” Green appealed to the powers that be in PNG to provide some support to enable more athletes to embark on such programmes, which produce Pacific Games Gold Medallists and University Graduates at the same time.”Not only that but the experience of living overseas is an education in itself. Currently we have several school leavers who can (for a modest cost to PNG) really excel if given the opportunity.If we sow the seeds now we will reap the rewards in 2023.”