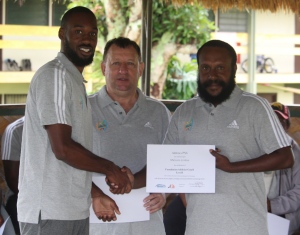 Athletics Coach Malcolm Limbai left Port Moresby today for Auckland where he will attend an IAAF Level Two Coaching course in middle and long distance. The course will start tomorrow and run for eight days, concluding on 1st November. The course is being facilitated by Oceania Athletics and will be conducted at the Auckland University of Technology facility known as AUT Millenium. The facility boasts a world class environment for high performance sports training, community sport, health and well being and related research and education.

Limbai teaches at Brandi Secondary School in Wewak and has been working closely with Otto Wafia in the last couple of years co ordinating athletic activities in the Province. This included a visit to Maprik earlier this year to identify teachers for an Athletics PNG Development Level coaching course that was staged during the term 2 holiday in Wewak. They also played key roles in the delivery of the East Sepik Inter school competition at Maprik. “Malcolm has been very active in athletics in East Sepik province in recent years, said Athletics PNG President Tony Green and we have recognised his efforts this year by having him attend a Basic Coaching Course run at NSI in Goroka in January and the Starters Course held in May. The Level Two course is an opportunity for him to broaden his knowledge and gain more confidence as a coach.