National Championships in Kimbe next month 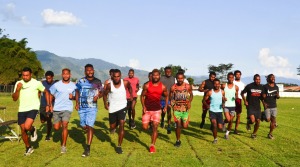 Athletic Associations around the country are preparing for the PNG Air National Track and Field Championships in Kimbe next month. The three day meet is scheduled to run from Friday 15 November to Sunday 18th at the Sasi Muthuvel Stadium.

It will be the second time this year for Athletics PNG to bring a major event to Kimbe and the Provincial Administration is again lending its support by way of the provision of resource personnel to assist in preparations. The local organising committee has been hard at work with Nolene Pidik co ordinating administrative preparations.

A Circular has been sent out to all member associations and other individuals that are known to be preparing to bring teams to Kimbe. The Circular was accompanied by the timetable of events, competition rules and other useful information. Athletics PNG has highlighted the importance of teams adhering to entry deadlines and reminded everyone that entries are not considered to be properly submitted unless dates of birth are provided for all athletes and full payment is made.

“Anyone can send a list of names,” said Secretary Philip Rehder, “but experience has shown that teams often turn up with very different teams from what they indicated in the first instance”. A full range of events will be offered in the Open and Under 18 divisions including the multi event Octathlon for men and Heptathlon for women. The usual limited range of under 16 events will also be conducted along with sprint events only for the under 14’s. T

eams should plan to arrive in Kimbe by Thursday at the latest, said Rehder, so that the draws can be finalised in good time to avoid delays to the programme. All relevant information about the Championships is expected to be up on the Athletics PNG website and Facebook page by the weekend and any queries should be directed by email to png@mf.iaaf.org

A Special General Meeting of APNG will be held on Saturday evening 16 November to elect a new Executive Committee and the notice and other information about this has been distributed to associations.