Regional Championships kicks off in Kavieng this Friday 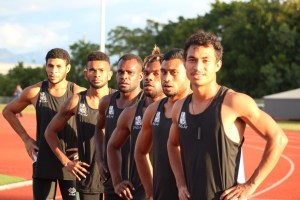 With the Pacific Games over, attention is now on the major domestic competitions in the Annual Calendar for the Sport of Athletics in PNG. With most of its available resources directed towards team preparation for the Games and related lead up competitions Athletics PNG decided to schedule its Regional and National Championships in the last third of the year.

The PNG Air NGI Regional Championships kicks off in Kavieng on Friday this week with events for the youngsters and the main programme being held on Saturday and Sunday.

Teams are travelling in from East and West New Britain with over 100 athletes in total expected from these two provinces. Utu Secondary school is hosting the event and the secondary schools are expected to provide the bulk of participants from New Ireland.

A primary school team made up of participants from six different schools including New Hanover have also registered their interest to take part. Major sponsor PNG Air is again flying in photo finish expert George Moramoro to provide fully electronic timing for all the track races, together with his assistant Jacinta Langa and other key officials from Kokopo.

Moramoro will also head to Port Moresby next week Friday for the PNG Air Southern Region Championships at the Sir John Guise Stadium in Port Moresby which will be held on 21 and 22 September. Significant interest is building up in the Capital for this event and a large turnout is expected both from within NCD and with teams from Central and Gulf provinces.The local organising committee have been hard at work over the past few weeks working on all aspects of the Championships. Participating teams are urged to email their entries including athlete dates of birth, by Thursday 12 September through email address monicaj79@gmail.com.

Apart from Moramoro, PNG Air is also flying in several key officials for the Championships including Philip Kamane from NSI and other Goroka based officials Morris Manai and Rupert Warigi. Following these two regional events, provinces are expected to be able to finalise their teams for the National Championships and begin planning their travel to Kimbe. The host of the 2017 PNG Games will be hosting the National Championships from November 15 to 17. Teams are reminded of the commitment they made unanimously by way of resolution at the Annual General Meeting in Goroka in June concerning submission of entries by 30 September.