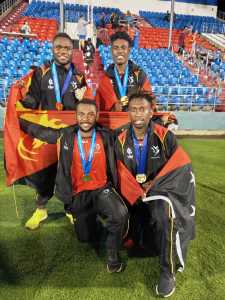 Toea Wisil led the way with another outstanding performance in the 200m as she blitzed the field with a scintillating 23.45 secs clocking, and later anchoring the womens 4*400m relay to Gold.

Sharon Toako won the womens javelin throw with a 47.13m effort from defending champion Linda Selui of New Caledonia whose last effort of 45.49 was her best.

Annie Topal upstaged team mate and fellow East New Britain athlete Rellie Kaputin to win the triple jump with an outstanding 12.91m into a 3.7metres per sec headwind. Kaputin was second with 12.44m and such was the dominance of the PNG girls that there was a gap of 99cm to third place (Candice Richer of FP in 11.45m). Poro Gahekave was again in superb form, dominating the womens 1500m to finish in 4min 42 seconds which is a four second improvement on her best ever time.

At the half way stage a clean sweep for PNG appeared likely, however Genina Criss of Guam had other ideas and picked up the pace considerably to overhaul both Jenny Albert and Lyanne Tibu. Donna Koniel put the PNG womens 4*400m relay team in a commanding position with an outstanding third leg to close the gap that had developed behind Fiji who had put their top runners Heleina Young and Ana Baleveicau first and second respectively. Not to be outdone the PNG men also grabbed gold as Benjamin Aliel set the race up for PNG with a commanding run in the first leg which Emmanual Wanga, Shadrick Tansi and Daniel Baul were able to maintain. Traditional rivals Fiji never mounted a serious challenge to the PNG boys and finished almost 3 seconds behind, after overhauling Vanuatu on the third leg.

Apart from Kaputin, silver medals were also won by Adrine Monagi in the 100m hurdles and by Raylyne Kanam in the heptathlon. Monagi was up against Australian Brianna Beaham and a silver was a very good result. Bronze medals were won by Edna Boafob (Heptathlon), Peniel Richard (Long Jump), Theo Piniau and Leonie Beu (200m), Lyanne Tibu 1500m, and James Kuadua in the 5000m Friday sees the final day of track and field and PNG’s top prospects for gold will be in the womens steeplechase (Poro Gahekave); the womens 400m hurdles (Annie Topal and Donna Koniel); the womens long jump (Rellie Kaputin); the womens 4*100m relay; and the mens triple jump (Peniel Richard).

The half marathon road race of 21km will be run on Saturday morning with Poro Gahekave carrying PNG’s hopes in the womens race . Three athletes will be chosen on Friday from the four men available to represent PNG (Sapolai Yao, Simbai Kaspar, Siune Kagl and James Kuadua).