Athletes get the final hit out before Apia 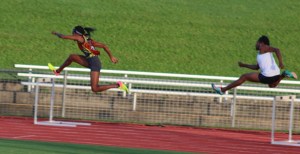 Two National Records in rarely run events and numerous personal bests have given the PNG track squad a boost as they prepare to head to Apia this weekend.

A top 400m performance from Benjamin Aliel with a personal best time of 47.7 seconds was the highlight of time trials run this week at Barlow Park.

Ephraim Lerkin announced his return to form with a national record time of 1min 21.1 seconds for the 600m ahead of Messach Fred and George Yamak.

Donna Koniel was also in great form in the 300m hurdles, marginally improving on the 43.29sec timing she set prior to the 2015 Games with a new mark of 43.1. She was pushed all the way by Annie Topal who set a strong pace in the first 200m.

Field event athletes meanwhile have been concentrating on the technical aspects of their events with Coaches Brett Green (throws) and Phillip Newton (Jumps and multi events). The track and field competition starts in Apia on Monday.