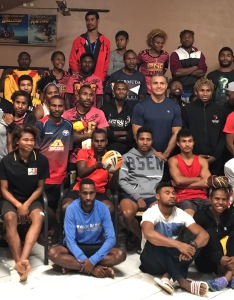 Former Kumul and Canberra Raiders star David Wesley visited the PNG Athletic team in Cairns this week and gave a great motivational talk to the athletes. Wesley was born in ENB and his family moved to Cairns when he was eight years old.

Soon afterwards his father died of cancer, so his mom raised him and his two siblings. He turned to sports to help him with deal with losing his hero and father.

At 18, he was picked up by Canberra Raiders and he played there for seven years, won an NRL grand final and represented PNG at the World Cup and other rugby tests. He played for another three years with two other NRL clubs. Wesley played Rugby League in the toughest comp in world for 10 years.

For him to stay on top was not easy, but commitment, hard work, healthy eating, sleeping well and taking advice from his coach/mentor all helped sustain a long career at the top. He spoke about the negative side of Social Media and urged athletes to avoid that so their minds are clear and focused on training and competition. At the end of his talk, Coaches asked the athletes five questions to see who had had been listening most attentively.

Those who answered correctly received Kumul merchandise and Wesley donated a rugby ball to the team. Camp Co ordinator Philip Rehder said that overall it was a very good motivational talk from an experienced Sports Professional who is passionate about developing young people in PNG. Wesley is currently contracted to LAE Tigers for coaching support and technical training. He commented favourably on the camp and congratulated the coaches and management for putting it together.