Athletes hard at work in Cairns 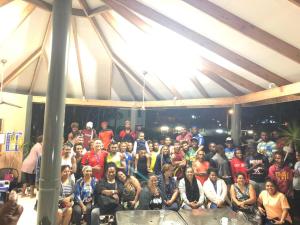 The PNG Community in Cairns has come out in a big way to support our Athletics team as they undertake their final preparations for the Pacific Games. The track and field competition in Apia begins on Monday next week July 15 and the PNG team has been camped in Cairns since June 29 after attending the Oceania Championships in Townsville.

Food and words of encouragement has not been in short supply to fuel the athletes intensive training programme with three different “wantok” groups visiting the athletes at the Bohemia Resort last week with a variety of dishes.

“The Resort is an ideal venue for groups such as ours said Team Manageress Nola Peni, as it has a large kitchen and dining tables around the poolside.

As word has spread of the athletes presence in Cairns, various individuals and groups have donated food supplies and on three occasions food has been cooked for the athletes and brought in” said Peni.

“On Tuesday night it was Highlands group, Wednesday Morobe and Thursday ENB”.

The athletes have been kept busy with activities in their free time and a visit by Kieran Scibberas of Titans Sports Performance to discuss matters such as mental preparation and light-hearted and positive interviews about their goals and Pacific Games training camp experience; it was well received by the athletes. Some team members have been interviewed by local media, including a visit to a Community radio station by three athletes.

Cairns based and former High Performance Physiotherapist Simon Morris screened elite athlete Ephraim Lerkin at his clinic and has also visited the athletes to offer support and advice to them as well as Athletics Team physio Monsy Uvire. A barbeque for the whole team was hosted by the PNG Wantoks Association at the Cairns Esplanade on Sunday lunchtime with a good number of the local PNG community turning out. The athletes got to meet and interact with their wantoks while enjoying their day off.

Camp coordinator Philip Rehder took the opportunity to thank the Community for its support. The team will head to Apia at the end of this week with the first group travelling on Friday, some on Saturday, and a number who do not have events on Monday returning to Port Moresby to travel on the second Team PNG Charter which leaves on Sunday morning