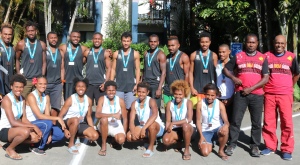 The Oceania Athletics Championships in Townsville last week highlighted some areas of improvement that need to be made during the final two weeks preparation but overall was a positive experience for the PNG team. Outstanding performers were Rellie Kaputin and Peniel Richard in the long and triple jumps; Daniel Baul and Donna Koniel (400m hurdles); Siune Kagl and James Kuadua (10000m); Simbai Kaspar and Mary Tenge (3000m steeplechase) Lakona Gerega (Javelin); Jacklyne Travertz (Hammer throw) and Steven Abraham (Para sprints).

Young Monica Korowi from Port Moresby also did very well in the U18 sprints, winning two bronze medals. Whilst the highlight was undoubtedly Rellie Kaputin’s stunning 6.50m last effort to snatch the long jump gold from world #5 ranked Brooke Straton, there were also huge national records for Lakona Gerega in the mens Javelin (64.89m) and by Jacklyne Travertz in the hammer throw (47.90m).

For Travertz this was a massive improvement on her own national record of 41.22m and was a fitting reward for six months of dedicated training with Coach Paul Bannister at his family’s home town of Allora in Queensland. Whilst the PNG 4*400m relay squads are in good shape, especially the mens, we have a lot of work to do in the short sprints.

No PNG athlete made the final in the 100m and only Daniel Baul and Emmanuel Wanga advanced to the 200m final. With Fiji’s Banuve Tabacaucoro and Samoa’s Jeremy Dodson both expected to feature at the Games, the best hope for our short sprinters is the 4*100m relay.

Toea Wisil was pipped on the line by New Zealander Georgie Hulls in the 100m and had to settle for fourth place, with Fiji’s Heleina Young in fifth. The mens middle and long distance squad is in good shape and is expected to challenge for medals in all the events from 800m upwards.

Poro Gahekave will spearhead PNG’s challenge in the womens middle and long distance events, with young Mary Tenge showing the potential to do well in the steeplechase with her good personal best time of 11min 43 secs in Townsville. Daniel Baul is the latest exciting prospect to emerge in PNG for the 400m hurdles. His time of 52.07 in the heats was a huge personal best and he is also proving to be one of the best 200m runners in the team, finishing fifth overall from a field of 28.

Benjamin Aliel , who ran an outstanding last leg in the 4* 400m relay is pressing for the opportunity to show what he can do in the 200m as well. The PNG athletics team for the Pacific Games are now in Cairns for a two week camp before heading to Apia on 13 July for the athletics competition which starts on July 15.

Throws Coach Brett Green who has assumed additional responsibilities following the departure of Dior Lowry reported from Cairns today that everyone there is very positive and he was very happy with the attitude and effort. Athletes George Yamak, Sapolai Yao, Ephraim Lerkin, Terrence Talio and Thoa Ora who did not attend the Oceania Championships, joined the team in Cairns on Sunday, as did Physiotherapist Monsy Uvire and coach distance coach Bernard Manau.Already with the team are Manageress Nola Peni, Head sprints coach Subul Babo and his assistant Allan Akia. Head Jumps and multi event coach Phillip Newton will rejoin the team this weekend.