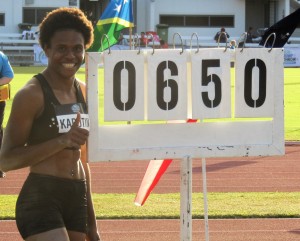 Rellie Kaputin provided the biggest upset on day one of the Oceania Athletics Championships in Townsville on Tuesday afternoon. With Australia and New Zealand fielding full strength teams there seemed little hope of any Pacific Islanders winning gold.

Kaputin had other ideas and was not fazed at all at the prospect of taking on Australian record holder Brooke Straton who is currently ranked #5 in the world as well as #11 ranked Naa Anang who was voted the outstanding female athlete at the Australian National championships in April this year after winning both the 100m and long jump.

After five jumps Kaputin was in third place with a PNG national record jump of 6.41m , behind Straton (6.49) and Anang (6.44). After briefly posing for a photo for the team, Kaputin sped down the runway to stun her fellow competitors and the whole audience with a magnificent final leap of 6.50m. Straton was unable to respond and had to concede the gold to Kaputin.

“This is a very significant performance for Rellie, said APNG President Tony Green. Once again Rellie has shown what a great competitor she is. We are all so proud of her.” Proud Coach Phillip Newton said Kaputin had trained very hard to get this far. “Rellie knows what she wants and works so hard to achieve her goals he said.”

Social media was abuzz with the story, which made the IAAF website.

Another top performance for PNG on day one of the Championships was a National Record for Lakona Gerega in the mens javelin. Gerega improved his personal best and existing record of 61.84m by over 3m to set a new mark of 64.89m. Daniel Baul ran a top 400m hurdles time of 52.07 seconds to shave one and a half seconds off his personal best and go through to Thursday’s final as the fastest qualifier.