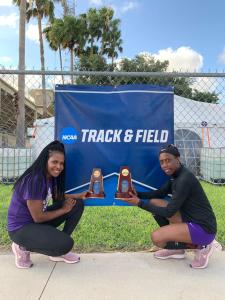 Competing for their school New Mexico Highlands University, Topal won the Triple Jump, following in the footsteps of Rellie Kaputin who won the title two years ago, and Toako set a new PNG National record in the Javelin to place fifth with a throw of 49.18metres.

Topal led all the way in the triple jump with a wind aided 13.02 metres but had an anxious few moments when Kaputins former team mate Fatim Affessi of West Texas A&M produced a big jump in the last round.

It matched Topal’s 13.02m however the PNG girl was declared the winner as her second best jump was better than Affessi. With the College season now over the pair can now focus on the Pacific Games where Toako will compete in Javelin and Discus and Topal the jumps and 400m hurdles.