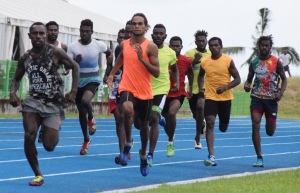 The focus is on quality rather than quantity this week at the Sasindran Muthuvel Stadium in Kimbe at the Athletics PNG selection trials for the Pacific Games.

Though the fields are small the events were of a high standard in the first two days. Toea Wisil was in fine form clocking 11.57secs for the 100m in perfect conditions with a wind reading of +1.9mps. Leonie Beu was second with a huge personal best of 11.85 seconds.

Beu was in a class of her own in the 400m where she ran another massive personal best of 55.85 seconds from Donna Koniel (57.84) and Isila Akpup. The mens 400m heats also produced a series of top performances with Daniel Baul making a huge breakthrough to clock 47.87 secs as the fastest qualifier in Tuesdays semi finals.

With National Champion Ephraim Lerkin as well as Emmanuel Wanga clocking close to 48 seconds flat an epic battle was expected in Wednesdays final. However it was Shadrick Tansi who proved to be the strongest as Lerkin paid the price for an over aggressive first 200m to fade badly in the home straight.

Central runner Tansi had just enough in the tank to hold off a late surge by Daniel Baul and breast the tape in time of 48.34 secs from Baul (48.35) and Wanga (48.65) . In the 3000m Monica Kalua celebrated her 15TH birthday in style with a dominant win in the 3000m in 10min 49.10secs from Mary Tenge (11:05). Abel Siune won the mens race in 9min 20.75 seconds after holding off a late challenge from Andipas Georasi . Leonie Beu and Toea Wisil both opted to run the 200m heats on Wednesday though the race was not really necessary with less than eight runners in the field.

The two will compete again in the 200m final. Rellie Kaputin showed no signs of being rusty in her first high jump competition for almost a year, clearing 1.65m.The highlight of the remaining programme is expected to be the mens long jump with national record holder Peniel Richard facing a stiff challenge from Roland Hure , Steven Ray Rocka Manau and Cletus Mosi.