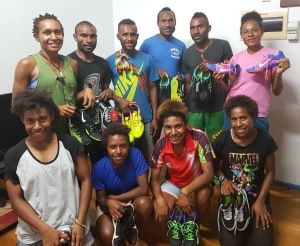 A total of 38 male and 19 female national and development squad athletes are travelling to Kimbe this weekend for final selection trials for the Pacific Games. The group includes 42 Goroka based athletes who have been in camp at NSI throughout the Christmas and New Year period as well as eight port Moresby based athletes and six from the New Guinea Islands.
The athletes will be accompanied by a total of ten coaches and technical officials who will support the athletes and conduct clinics for local athletes and coaches over a ten day period. Athletics PNG President Tony Green thanked the Chebu Shipping Company for its support with discounted fares for the squad as well as the PNG Olympic Committee for its financial support for team preparations.

After months of hard training the athletes now have the opportunity to compete on an all weather track , said Green and some very good performances are anticipated.

Training in Goroka has been really good he added but the wet conditions at this time of year are not conducive to good competition. He thanked sponsors NSI, PNG Air, Prima Smallgoods and Trukai for their support for the programme. The mens 400m promises to be the highlight of the trials in Kimbe next week.

Even without the US based Theo Piniau and the 2017 Mini Pacific Games Gold medal winner Benjamin Aliel the field is still very strong with Ephraim Lerkin and Emmanuel Wanga set to be challenged by a host of quality up coming athletes including Shadrick Tansi, Daniel Baul, Lionel Lens, Theo Jonah and Valtyne Buskens.

The mens 800m is also eagerly anticipated with Lerkin, Jonah, Buskens and other newcomers Freddy Messach and Leka Wagi stepping up to challenge the established middle distance runners including Kamniel Matlaun, Martin Orovo and George Yamak.

Goroka based Jiwaka athlete Messach is beginning to show the benefits of a full year’s training under Coach Dior Lowry with some impressive times in recent time trials including a sub 4min 16sec timing for 1500m in Goroka this week. The mens jumps squad are firing on all cylinders and a national record in the mens long jump is a distinct possibility if the conditions are favourable.

With Karo Iga and Rocka Manau also in the field a high quality competition can be expected. In the womens events Toea Wisil remains the clear favourite in the 100m and 200m but based on her showing at the National Championships last year Leonie Beu should not be underestimated. Wisil is also expected to run the 400m which should see a number of athletes pulled through to some very good times including Beu, Isila Apkup, Donna Koniel and Regina Bokat.

In the middle distance events emerging ENB talent Lyanne Tibu will be keen to check her progress after clocking some good times in Goroka. Duke of York Islander Monica Kalua, who does not turn 15 until has been a class apart this season in the longer distance events and looks set to dominate the 3000m and 5000m. Competition will also be conducted in the hurdles and the multi events with 2015 Pacific Games Gold medallists Adrine Monagi and Robson Yinambe both taking part Athletics PNG and the West New Britain Administration aim to make the most of its visit to Kimbe by National Athletes and Coaches by conducting other activities. The selection trials will be conducted in the afternoons from Tuesday to Thursday next week at the Sasi Muthuvel Stadium with events spread out to allow recovery for the athletes between events.

A competition for local athletes will be conducted on Friday afternoon and Saturday morning then a final session of selection trials on Saturday afternoon. A coaching clinic for local teachers and other invited personnel will be conducted over three mornings next week from Monday to Wednesday and a kids Athletics programme is planned for Thursday. Finally, a number of elite athletes including Toea Wisil , Peniel Richard and Ephraim Lerkin will visit selected schools to create awareness and talk about their experiences on Monday and Tuesday 11 and 12 March before the squad returns to Lae