Prima on board as sponsor ahead of trials 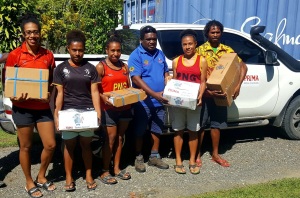 The National Athletics squad training at the National Sports Institute are gearing up for final selection  trials next month for the Pacific Games in Samoa this July. Jumps coach Phillip Newton and throws coach Brett Green also paid visits to NSI this month to check on the progress of the Athletes. Competition in the mens sprints is very strong with Michael Penny, Linus Kuravi, Jobbie Kinzu Ephraim Lerkin, Emmanuel Wanga and several other athletes all coming into good form.

Toea Wisil is also looking very sharp after her recent visit to Australia where she recorded a very good 56.29secs  timing in the 400m.

Isila Apkup and Leonie Beu have also been very impressive in training and in recent trials and with the return to form of Regina Bokat, the womens 4*400m relay squad is taking shape.  Even many of the jumps and multi event squad have been clocking impressive times in the sprint trials, especially Karo Iga, Roland Hure, Cletus Mosi, Robert Oa and Edna Erick.

Coach Newton basically told these athletes just do sprint training during December and January, stressing the importance of speed in the horizontal jumps. In the longer distance events the surprise package has been 14 year old Duke of York Islander Monica Kalua who first showed her potential at the 2017 PNG Games in Kimbe.

“Monica was hardly seen last year said APNG President Tony Green but we invited her for the Camp because it was clear from her PNG Games performances that she had talent”.

Kalua, who turns 15 in March has been showing a clean paid of heels to the Simbu runners in the 3000m and 5000m events. Former Athletics PNG Statistician Bob Snow always said that we should look to the New Guinea Islands for our distance runners and if you look at the National records most distance records are still held by the likes of Rosemary Omundsen, Tau John Tokwepota and John Kokinai.

In the mens distance events Simbai Kaspar has been dominant, with Siune Kagl also showing good form and Andipas Georasi and George Yamak showing signs that they are returning to form. Green thanked Sponsors Prima Smallgoods, Trukai Industries , NSi , the PNG Olympic Committee and Niugini Tablebirds for their support for the programme