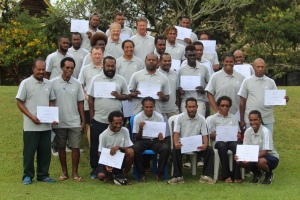 Athletics PNG has just concluded the delivery of an innovative Coaching Course at the National Sports Institute, Goroka.  The course was attended by 26 representatives from the four regions. The two week coaching course was presented by the Sprints and hurdles Head Coach Dior Lowry with Philip Newton (Jumps) , Brett Green (throws) , and Bernard Manau (Distance)  delivering components relating to their respective areas of expertise. NSI Director, Janet Gimots and her staff  Samu Sasama,Kylie Martens and Philip Kamane also presented sessions.

President Tony Green was on hand at the weekend to present certificates before the coaches returned to their respective provinces. He said that with the ongoing training camp at NSI involving several  volunteer coaches who did not hold any formal certification and the fact that many teacher coaches around the country were on holiday , APNG  could not miss this opportunity to stage the Course. He thanked the PNG Olympic Committee for its support through the DNSS Programme ; NSI Director Janet Gimots for her support; and Dior Lowry and Bernard Manau for their input with the Course Manual. He said that APNG planned to deliver the course in other centres in the second half of this year.