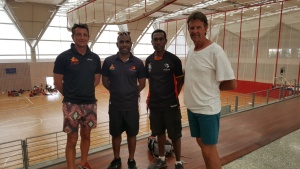 Specialist jumps and multi-events coach Phillip Newton was at the Sir John Guise Stadium last weekend to witness the National Track and Field Athletics Championships. Newton, who has been working with Athletics PNG since 2014 was on the lookout for new talent that can be developed for the Pacific Games next year. Accompanying him was Coach Luke Donatini who will perform the role of Coaching Director for the PNG Athletics team for the Games. The Championships were supported by PNG Air, Lae Biscuit Company, Prima Smallgoods, Trukai Industries and Coral Sea Hotel. Newton was particularly impressed with Robert Oa of Port Moresby who has been taking part in jumps competitions for the last couple of years. “Robert is very raw and needs to improve his running technique, but that can be easily fixed, said Newton. He has all the physical attributes to become an outstanding decathlete”. Another athlete who impressed Newton was 17 year old Edna Erik from Lae who ran the women's 200m and 400m. Newton recommended that she be prepared for the heptathlon.

Eldon Tioti (ENB) , Daniel Baul (NCD) and  Shadrick Tansi (Central) who have all been on the Athletics PNG radar for a couple of years each stepped up significantly to stake their respective claims for places in the team for the 2019 Games. Tioti who has returned to his native ENB after completing his secondary education in Port Moresby gave Peniel Richard a very strong challenge in the long jump, finishing second with a leap of 7.15metres to Richard’s 7.19m.  Tansi set the scene for a high quality men's 400m final by registering the fastest time in the heats with 49.01. However Ephraim Lerkin and Emmanuel Wanga both used their experience and saved something for the final. Tansi improved to 48.88 in the final but had to settle for third place as Lerkin powered to a personal best 47.92secs with Wanga second.  Baul won the men's 400m hurdles in 55.00 seconds and placed fourth in the 400m final. Having the 400m hurdles heats sandwiched between the 400m heats and final on Saturday was tough on Baul and he did very well to clock 49.02 in the 400m final. Another athlete to show significant improvement was NSI based Abel Siune who tracked Simbai Kaspar for three and a half laps before outsprinting him in the home straight to win the men's 1500m in a huge personal best 4min 16 seconds. There were many other good performances (in fact too many to mention) including Leonie Beu who won the womens sprint double in impressive fashion; Isila Apkup in the women's 400m ; Chelsea Garesa in the women's 100m; Lyanne Tibu and Mary Tenge in the middle distance; and Ratu Hou in the men's 110m and 400m hurdles.

Looking at potential for the future, Donatini was impressed with the Javelin throwing ability of young  Falton Hori from Jiwaka as well as ENB’s Bryan Adavu who threw 51.96m in the open mens Javelin. Elizah Ryan of East New Britain was outstanding in the under 18 long jump and high jump and in the under 16 division Sama Kore from Central Province performed very well. On the track, Julian Lei and Paias Wisil both impressed in the Under18   100m final and young Terrence Talio of NCD made the open mens 100m final, finishing fourth behind established sprinters Michael Penny, Charles Livuan and Linus Kuravi. Young Jonnica Manau of East New Britan was the runaway winner of the U14 girls 100m, clocking 15.63secs). Athletics PNG and its coaches will now study the results carefully and make some additions to its training squad for the Pacific Games.