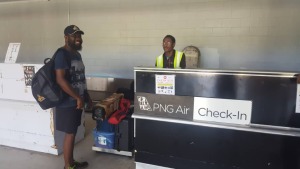 Athletics PNG and its sponsor PNG Air came to the rescue of Athletics New Ireland today (Wednesday) as the Provincial Championships were getting underway in the afternoon at Utu Secondary School in Kavieng.  The New Ireland Athletic association, assisted by local officials Subul Babo and Medley Laban had been unable to raise the funds to fly across from Kokopo the APNG Photo Finish expert George Moramoro. Teams had already begun arriving in Kavieng by Tuesday afternoon and by Wednesday morning approximately 150 athletes had arrived. With the photo finish camera, Moramoro can capture fully electronic times for track races without the need for lots of timekeepers using manual stopwatches.”Manual times can be very inaccurate, said 1991 South Pacific Games 400m champion and former national record holder Babo. The athletes will be very happy to get electronic times”. Laban thanked  PNG Air for providing a ticket at short notice for Moramoro and APNG for covering his accommodation cost. Teams from various districts around Kavieng together with several high school teams ( including Utu Mongop , Madina, Namatanai and Lihir) are assembled for the two and half day event which will conclude on Friday. Meanwhile, APNG Secretary Philip Rehder said it was disappointing to hear of ongoing difficulties being faced by New Ireland Athletics whose team got stranded in Port Moresby last year and did not make it to the National Championships in Goroka and then did not attend the PNG Games. He appealed to decision makers in the Province to work with Athletics PNG to ensure that the Province was represented at this year's Championships in Port Moresby. “New Ireland has been a rich source of talent over the years and we hope that the athletes will not be let down again”, he said especially since next year is a Pacific Games year.