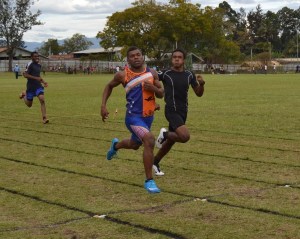 The National Sports Institute came alive last weekend as over 700 athletes from all around the Highlands as well as Lae, Bulolo and Port Moresby participated in the PNG Air Highlands Momase Regional Athletics Championships. The highlight of the weekend was strong competition in both the Open and Under 18 men’s 100m and 200m. PNG Games 200m winner Linus Kuravi won both the Open Men’s 100m and 200m in times of 11.15secs and 23.06 respectively with 18-year-old Manoka John (11.22) giving him a strong challenge in the 100m. Toea Wisil’s younger brother Paias showed the benefit of consistent training in Goroka by winning both the 100m and 200m in the U18 division. In fact, his times of 11.34 and 23.10 in the face of strong challenges from Lae’s Ezekiel Nawas and Goroka based Jnr John Hou were very impressive. National Rep Simbai Kaspar as expected dominated the men's distance events. Para athletes also impressed at the weekend, in particular, James Kaudua in the men's 5000m who continued the good form he showed at the PNG Games in Kimbe. A quality race in the Open 800m was the highlight of the women's track competition, with Tuna Tine winning from Jenny Albert and Mary Tenge. Lae’s Rocka Manau produced arguably the best field event performance of the weekend with a 6.71m long jump. Manau clearly adapts well to the conditions in Goroka as he also won the National Title there last year. Sponsors PNG Air , NSI, Prima Smallgoods, Lae Biscuit, and Sengda  Trading were all acknowledged and thanked for their support. Organisers of the event had to deal with the usual issues of late entries and cheating with several grossly over age athletes in the U16 boys division. Athletics PNG has requested a report on the conduct of one visiting team official from Simbu who was seen taking out his frustrations with a verbal tirade against an innocent bystander. APNG Secretary Philip Rehder said this was unacceptable behaviour and the matter would be investigated and action taken if deemed appropriate.