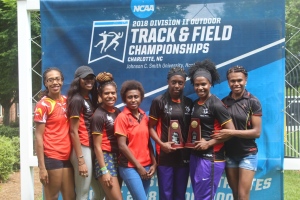 PNG Athletes Annie Topal and Sharon Toako both competed well at the NCAA Division Two National Championships recently in Charlotte, North Carolina, securing fourth place overall and a podium finish in their respective events of Triple Jump and Javelin throw. Topal jumped 12.81m which was an impressive performance for an athlete in her first season in the USA. The event winner Diana Cauldwell (13.16m)  was competing in her fourth and final year of Inter-Collegiate Athletics whereas the second and third place getters were in their third and second seasons respectively. Toako was fourth in a closely contested Javelin competition with a throw of 47.21m which was just shy of her national record mark of 48.60 set earlier in the season. Only 8 cm separated the throwers in second third and fourth, with the event winner throwing 49.11m and second place 47.29m

Competing for New Mexico Highlands University, the two ENB girls each contributed five points to their teams total of 26  points which secured them seventh place overall. A total of 116 universities from all over the USA were represented at the Championships, although some schools only participated in one or two of the 21 events on the track and field programme. Athletes qualify or are invited to participate in the National Championships based on their performances in intercollegiate competition through the season. For field events, it's usually around the top 16 to 20 ranked athletes that make it to Nationals. Afure Adah was also at the Championships with her Minnesota State 4*100m Relay team and a number of other PNG athletes travelled to the event to support their teammates.