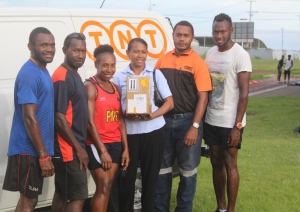 Athletics events around the country can proceed as normal this year after TNT Express responded to a request for assistance from Athletics PNG to ship a consignment of starting caps from Brisbane. Due to their reclassification as dangerous goods,  caps for the type of starting pistol traditionally used around the country have become extremely costly and difficult to import, resulting in supplies drying up. APNG Secretary Philip Rehder said that officials around the country had been worried about being able to conduct their school carnivals as well as Regional and National Championships. Rehder thanked the General Manager of PNG Air Freight Doug Maskelyne for his assistance in authorizing a free of charge clearance and shipment of caps through TNT Express. Coach Allan Akia was on hand in Lae to receive the shipment from TNT Lae Branch Manager Valmay Barry.