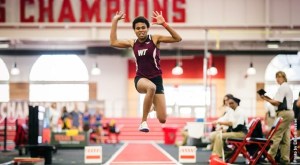 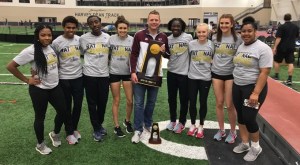 Rellie Kaputin claimed her third NCAA Division 2 National Title on Saturday as she won the long jump at the National Indoor Championships in Pittsburg, Kansas with a leap of 6.24m. This follows her success in the triple jump last year when she won both the indoor and outdoor national titles and was a fitting end to a stellar career at West Texas A&M University. Kaputin wasn’t at her best in the triple jump but still collected six vital points for the team by placing third and her sixteen points was again the highest contribution from any WTAMU athlete. The Lady Buffs maintained their position as the #1   Division 2 team in the nation established in winning the outdoor title last year. Kaputin can now look forward to the Commonwealth Games at the Gold Coast next month and to graduating in May.