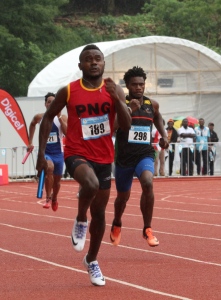 Benjamin Aliel has become the latest PNG athlete to secure a full scholarship to attend College in the United States. Aliel, who rose to prominence towards the end of last year to win 400m gold medals at the PNG National Championships, PNG Games and then the Pacific Mini Games has been awarded a scholarship by the Oceania Australia Foundation. This is the same programme under which five other PNG athletes  (Sharon Kwarula, Cecilia Kumalalamene, Wala Gime, John Rivan and Theo Piniau) attended Junior College for two years between 2011 and 2015. In accepting the Scholarship Offer an excited Aliel said he felt honoured to be one of the recipients of a 2018 Oceania Australia Foundation Scholarship and was truly grateful for the opportunity.

“Ben actually first showed his potential at the 2014 PNG Games shortly after graduating from Malabunga Secondary School said APNG Secretary Philip Rehder, but our focus then was on the 2015 Pacific Games and competition for places in the men's sprint squad was very strong”.  After two years at home in Popondetta, Aliel relocated to Lae early in 2017 with the intention of enrolling for studies at Unitech but his hopes were dashed by school fee difficulties. Hence his focus turned to athletics and he began training with Coach Allan Akia in preparation for the PNG Games. Akia clearly did an outstanding job with Aliel as he won the 400m at the National Championships in dominating fashion and went on to run three very good 400m races at the PNG Games. The manner of his victory at the Pacific Games was extremely impressive as he ran like a seasoned professional to come out on top in a very competitive field, timing his runs to perfection in both the semi final and final.

Athletics PNG, through the PNG Olympic Committee, nominated Aliel for an Oceania Australia Foundation scholarship and he was selected ahead of other candidates from around the region.  “There is no doubt that Benjamin’s outstanding performance at the Mini Games where he ran 47.99 seconds in the semi-final and 48.01 in the final that caught the attention of Coach Jordan Strofaci at Southwestern Community College, Iowa” said Rehder. The US academic year begins at the end of August and that is when Aliel will travel to Iowa.