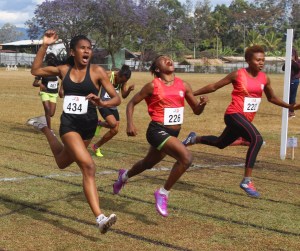 A total of 425 athletes from 16 teams representing 12 provinces participated in the National Track and Field Championships at the National Sports Institute in Goroka last weekend. Track events were very competitive in all divisions as were the mens jumps in all three age divisions. The open mens throws also attracted a reasonable number of competitors. However, the number of competitors in the womens jumps and throws and in the junior divisions for the mens throws was very small. The outstanding individual performers of the weekend in the open division were Leonie Beu and Benjamin Aliel of Morobe and Letisha Pukaikia of NCD. Leonie Beu was identified by Athletics PNG twelve months ago at the Momase Regional Championships and was selected for this years Oceania Championships in Fiji. She was a clear winner in the 400m final at NSI on Friday and held off a strong challenge from Pukaikia in the 200m final on Saturday. Pukaikia had won the 100m on Friday in 12.79 seconds in a  photo finish ahead of Nancy Malamut (also 12.79) and Regina Bokat of ENB (12.86). Former ENB based Benjamin Aliel had an outstanding championship winning the 400m in a very good time of 50.05 seconds and the 800m in 2min 04.21 seconds.He also placed third in a very competitive men's 200m final.

Kupun Wisil’s experience told in the men's 100m as he negotiated the three rounds with composure and saved his best for the final in which he led from start to finish.His 11.08 clocking in the final was a dominant performance over his younger rivals from ENB Michael Penny, Charles Livuan and Leeroy Kamau. However the exciting new find from Abau, Thoa Ora showed that his performance in the Southern Region Championships the previous weekend was no fluke as he won the silver medal in 11.21 seconds. Livuan however once again showed his class in the 200m winning comfortably from lane 1. Gethrude Komba of Simbu dominated the women's distance events, winning the open 5000m and 10000m as well as the U18 3000m. Teammate Simbai Kaspar dominated the men's distance races, winning the 1500m, 5000m and the steeplechase.

Peniel Richard won the men's high jump and triple jump as expected but had to settle for third in the long jump as he was upstaged by Rocka Manau from Lae who jumped 6.64m to win from Eldon Tioti of ENB (6.56) and Richard 6.51m.

The National Championships is a major talent identification tool for Athletics PNG and there was plenty of emerging talent on display at the weekend. In the under 18 division Lyanne Tibu of ENB impressed in winning the 800m and 1500m. Young NCD athletes Grace Nawara, Xavier Wailoni and Frederick Ageda each won two events in their age divisions. Oro’s Celinora Kararere ran two very impressive 400m races in the U16 division, winning gold in both 400m and 800m as well as silver in the 200m. Eighteen-year-old ENB athlete Regina Bokat was outstanding in the open division, competing against more experienced athletes. The Grade Ten Warangoi High School Student was second in the 400m, third in the 100m, and fourth in the 200m.

The value of the photo finish equipment in eliminating any doubt over close results was clearly evident on three occasions when athletes were separated by less than five one-thousandths of a second, including the women's 100m final.  During the closing presentation, thanks were extended on behalf of Athletics PNG to the major supporters of the event (the Director and staff of the  National Sports Institute) as well as other sponsors including Mapai Transport and Coca-Cola