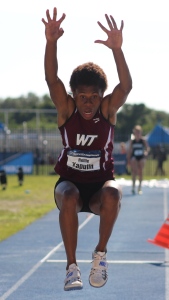 Rellie Kaputin delivered another Champion’s performance to play a big part in her West Texas A&M Team winning the NCAA Division 2 National Championships team title in Bradenton, Florida last weekend. The 24-year-old from Tinganalom village in East New Britain produced a massive long jump of 6.53metres for second place behind her teammate Fatim Affessi. “Despite the fact that the wind reading was +2.1metres per second which is slightly over the maximum 2.0 allowed for this to be recognized as a record it is nonetheless a very significant breakthrough for Rellie, said APNG President Tony Green especially when one considers that the qualifying mark for the Rio Olympics was 6.70 metres.”

However there was more to come from Kaputin, and after a 1.71m high jump secured her fifth place and four more points for the team on day two she was able to focus on her favorite event of triple jump on the final day. An opening effort of 13.05m broke her own national record and put her in the lead after round one, with Diane Cauldwell from Lincoln Missouri in second place on 12.93m. It stayed that way for the next four rounds until Cauldwell produced a great final jump of 13.23m to take the lead. This left Kaputin on the runway for the last jump of the competition in second place. Had the national title been snatched from her grasp at the death? What did she have left? Her answer was a stunning final jump of 13.28m, by far the best ever performance by a Pacific Islander in the triple jump. The best jump by any Australian athlete this year is 13.30m by Meggan O’Riley in winning the National Championship in Sydney on 1 April.

“Rellie is such a great competitor,” said Green. This is what champions do – they pull something out of the hat when the pressure is on. We are so proud of Rellie and we really hope that PNG can now finally get behind her and provide the support that she deserves.Field events don’t get the attention that track events get but we must recognize that Rellie too has the capability to qualify for the Olympic Games.

Kaputin returns to Rabaul on Friday for her first home visit in 18 months before traveling to Fiji in the third week of June for the Oceania Championships.