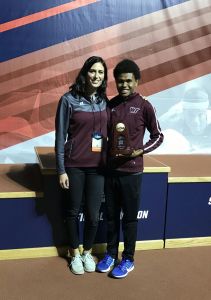 Rellie Kaputin was named NCAA D2 Indoor Field Event Athlete of the year by the USA Track and Field Coaches Association following her outstanding performances at the National  championships on 10 – 12 March. The 24 year old from Tinganalom Village East New Britain lived up to her growing reputation as a big meet performer with another outstanding championship performance in Birmingham , Alabama. Kaputin won the triple jump with yet another PNG National record of 13.09 metres, came second in the long jump and placed sixth in a very tightly contested high jump competition Head Coach of West Texas A&M Darren Flowers said he was very proud of the way Rellie competes for the school, adding that “her  achievements are an example of where hard work and humility can take you.”

First up last weekend was the long jump where Kaputin once again displayed her competitive edge by leapfrogging two athletes with her last jump to claim second place.In the triple jump her third effort of 13.09m put her beyond the reach of her rivals and the real competition was for second place which was won by her team mate Malika Ouedraogo  with 12.70m. With the title all but assured, Kaputin was able to start the high jump and cleared 1.62m, 1.67m and then 1.70 all at the first attempt whilst the triple jump competition was still in progress. In the end only one athlete cleared 1.76m and Kaputin was one of five athletes to clear 1.73m, finishing sixth on countback.

Meanwhile 19 year old Afure Adah continued her recent good form by clocking a personal best 24.40 seconds in the 200m. Such was the strength of the competition however that this was not sufficient to make the final. Adrine Monagi finished just outside the medals in the Pentathlon despite a huge effort in the last event where she clocked an impressive 2min 25 seconds for the 800m. Peniel Richard was unable to reproduce his recent good form in the triple jump and after registering 14.57m in his first jump, two fouls left him outside of the top 9 who proceeded to the final.