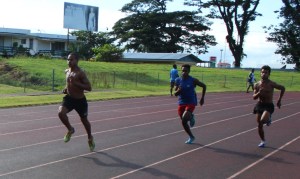 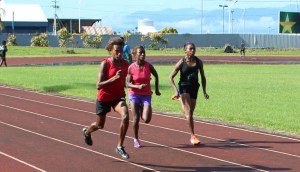 Lae based athletes are continuing their preparations for the 2017 season despite the disappointment of the PNG Games having been deferred a second time. Coach Allan Akia is encouraging athletes to maintain a strong training commitment and take part in weekend competitions. The Morobe Athletics team was really gearing  up well for the Games last year and there was obviously a fall off in training commitment when news broke of the initial deferral.  However with a group of National squad athletes based in Lae encouraging the Morobe youngsters, things have picked up again since Christmas. A number of new talents have caught the attention of Athletics PNG Coaches especially Leonie Beu in the women's sprints and Philip Joe and sixteen year old Ezekiel Nawas in the men's sprints. Nawas, along with West New Britain’s Lawrence Lamond are under consideration for possible national selection in the U18 division, depending on their performance over the next couple of months. Athletics PNG is currently reconsidering the matter of how its national teams will be selected this year, especially for the Oceania Championships, as the March PNG Games would have been a huge part of this. Secretary Philip Rehder reminded all centres of the importance of arranging competitions for its athletes and submitting results. He said that a couple of invitational meets may be staged in May and that an announcement will be made when the arrangements were confirmed.