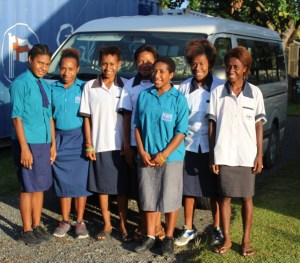 PNG’s female middle and long distance squad have begun their campaign for medals at the 2017 Pacific Mini Games under Athletics PNG’s continuing domestic scholarship programme. Seven athletes, from whom the bulk of the team will be selected are now based in Lae including medallists from previous Games Tuna Tine, Rama Kumilgo and Jenny Albert. They are joined by Mary Kua and Esther Simon whilst Cecilia Kuman and Gethrude  Joe have rejoined the programme after an absence of two years.Veteran of the group  22 year old Tuna Tine is beginning her eighth year in the programme  as she undertakes her Grade 12 studies at the AOG Christian Academy. Athletics PNG Secretary Philip Rehder thanked Lae Biscuits, Panamex and Prima Smallgoods for their support for the programme through occasional donation of food products and household supplies.

Athletics PNG is aiming to improve on its 2015 medal haul of three gold, four silver and three bronze from six  womens middle and long distance events. Although its campaign is expected to be spearheaded by US based Poro Gahekave, Rama Kumilgo is aiming to defend her Steeplechase title and Goroka based Mirriam Goiye has signalled her intention to challenge again for  the 1500m and half marathon gold. Jenny Albert will also be aiming to improve on her two silver medals from Port Moresby 2015.