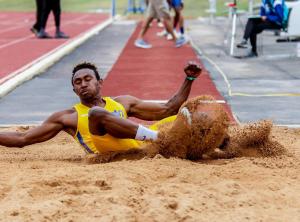 Peniel Richard posted a big improvement in his personal best with a 7.02m long jump last weekend at the Lone Star Conference indoor championships at Alamosa , Colorado. In his favourite triple jump event on the second day Richard continued his recent run of good form with a 15.22m effort that earned him fourth place. Adrine Monagi continues to improve in the multi events and posted a personal best 3677 points in the five event pentathlon which included a fine 8.72 seconds for the 60m hurdles and an excellent 1.67m high jump.

Newcomers to the USA Robson Yinambe and Wesley Logorava were both in action for Cloud County Community College at their Regional Indoor Championships in Pittsburg Kansas. Yinambe posted an improved points total of 4279 in the seven event heptathlon compared to his 4160 three weeks previously.The Pacific Games decathlon gold medallist has shown his competitive nature with some gritty performances. His running events have been good, with a 7.24 clocking for 60m , 8.93secs for 60m hurdles and 2min 52 seconds in the 1000m. Wesley Logorava found the transition from outdoor running to a 200m indoor track with tight curves quite a challenge but has posted faster times in each of his five races to date, with 22.49 seconds last Saturday being his season best