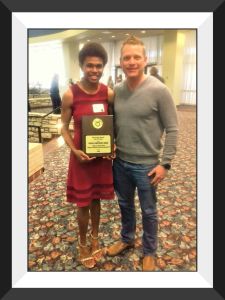 The award was in recognition of Kaputin becoming the first athlete since 2012 to earn All-American honours in three different events at the same National Championships. Her 14 points at the 2016 NCAA Division 2 Nationals is the most by any West Texas athlete in school history. She finished second in the triple jump with a mark of 12.83m which broke both the School and PNG National records. She also finished sixth in the long and high jump. Kaputin set a new school record in the long jump with a leap of 6.22m on her fourth attempt.  She also earned US Track and Field Coaches Association  National honours in all three of those events. Kaputin was awarded the Bob Noble Award that is given to the Outstanding Female Field Athlete of the Lone Star Conference Championships after winning the long and triple jump and finishing seventh in the high jump.

In accepting the special achievement award Kaputin said “I have been working very hard to achieve my Goals in all my competitions,” Being honoured with this special achievement award means a lot to me. At least I have something to bring back to my own country that will always remind me of being in Texas. Coming here to WT is like a dream come true. I enjoyed being in the classroom working hard every single day to get my degree and also I am so blessed to be part of the best Track and Field Team. They are like Family to me when I am far from home.”