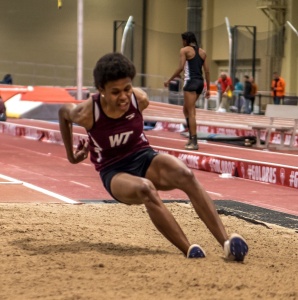 Rellie Kaputin was again the star on an action packed weekend for  PNG athletes in the USA who competed in various events around the country. Kaputin led her West Texas A&M University team to their fourth consecutive Lone Star Conference Indoor Championship Title as she won all three jumping events,setting two PNG National records in the process. First up was the long jump where her last effort of 6.27m  was not only a record for the Conference but the eleventh best mark in the entire history of NCAA Division Two indoor competition. Next was the high jump where Kaputin won the event on countback in a seasons best 1.71m. In only her second triple jump competition of the season the PNG record holder then improved her own mark to 12.88m to win by a huge margin. Kaputin is now looking forward to the NCAA Division 2 National Championships in three weeks time leading the rankings in both long and triple jump.

Meanwhile over in New Mexico Poro Gahekave  clocked 3min 03.66 seconds for the 1000m and Shirley Vunatup qualified for the National championship with a 58.05 second 400m whilst Naomi Kerari  struggled to replicate her training performances  in competition, clearing only 1.56m in the high jump. Over in Minnesota Afure Adah continued her good form with an excellent clocking of 24.71 seconds for 200m which when adjusted for the track specifications ranks her sixth in the country in Division 2.

At the same competition which was held in Alamosa Colorado, Peniel Richard also posted a big improvement in his personal best with a 7.02m long jump followed by a seasons best 1.95m in high jump. In his favourite triple jump event on the second day Richard continued his recent run of good form with a 15.22m effort that earned him fourth place. Adrine Monagi continues to improve in the multi events and posted a personal best 3677 points in the five event pentathlon which included a fine 8.72 seconds for the 60m hurdles and an excellent 1.67m high jump.