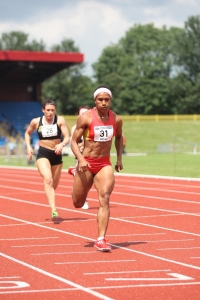 Toea Wisil has started the 2017 season in record breaking form and is already running the sort of times that saw her qualify for the Rio Olympics last year. Competing in a local club meet in Brisbane on Saturday the PNG record holder recorded a sensational 11.26 seconds in the 100m only to find that the  wind reading was +2.6metres per second, just over the maximum 2.0 allowed for record purposes.It was a similar story in the 200m where Wisil left the field trailing in her wake as she recorded a time of 23.11 seconds (+3.4)