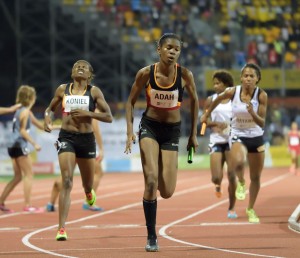 Young PNG sprinter/hurdler Afure Adah has made a good start to her 2017 campaign competing on her home indoor track at the Minnesota State University Mankato. Her performances in the 60m hurdles of 9.08 secs and 9.01 secs and her winning time of 25.29 in the 200m earned her the award of Northern Sun Intercollegiate Conference Athlete of the week. Adah made her debut for PNG at the 2015 Pacific Games where she was part of  our gold medal winning 4*400m relay. She will compete again at the University of Nebraska this weekend. Meanwhile Rellie Kaputin, Adrine Monagi and Peniel Richard will begin their 2017 seasons at different competitions this weekend; as will Poro Gahekave, Shirley Vunatup and Naomi Kerari who head to Oklahoma with their South Plains College team.