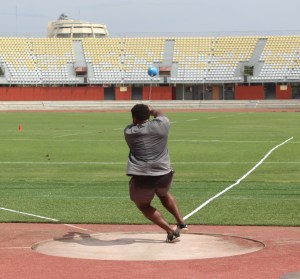 Debono Paraka added the Hammer throw to his collection of National Records recently in Port Moresby. The 26 year old, who already holds the shot put and discus records  added over three metres to the hammer throw record of 34.62m set by Vipi Sejuk at the 1993 Pacific Mini Games in Vanuatu . The new mark of 37.95m was achieved on his third and final throw and was witnessed by a small group of athletes and officials including Athletics PNG President Tony Green. Hammer throw is an event rarely conducted in PNG and for safety reasons competitions are usually conducted in isolation from main track and field competitions."Debono hardly broke sweat and clearly has the potential to throw much further with the benefit of some coaching and good competition"  said Green. This brings to ten the total of new national records set in 2016 , with four in the mens events and six in the womens events. New National Records were set in 2016 in the 100m and 200m by Toea Wisil ; in the long and triple jumps by Rellie Kaputin ; in the hammer throw by Jacklyn Travertz and in the Heptathlon by Adrine Monagi. On the mens side Theo Piniau set a new mark in the 200m ; Peniel Richard in the triple jump and Paraka in the discus and hammer throws.