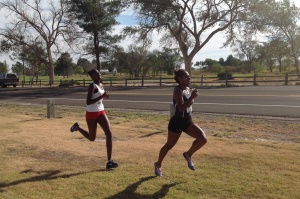 Poro  Gahekave is  running consistently well for her South Plains College team in her first cross country season. The 23 year old who burst onto the scene as a 14 year old in 2007 and won the inaugural womens 3000m Steeplechase Pacific Games Gold  joined the Texas team in January this year when she resumed her studies after the Pacific Games.  Gahekave, who had been written off by some  observers after a dip in form during 2009/2010 resurrected her career after moving to Kokopo in 2011 and after completing her secondary education in 2013 set her sights on the Port Moresby Games. She won silver in the 3000m steeple with a significant personal best performances, denied the gold only by team mate Rama Kumiligo who was herself in record breaking form.

Gahekave has run three sub 20 minute 5km cross country races in the last two months and placed seventh last weekend in the Junior College Regional Championships with a personal best 19min 36.96 seconds. She is now looking forward to helping her team do well at the National Junior College  Cross Country  Championships in El Dorado Kansas on November 12.  Gahekave will   finish off the cross country season with her first half marathon race at the NJCAA  Nationals at the picturesque venue of  Hugh S Branyon Backcountry Trails at Orange Beach,  Gulf Shores , Alabama on November 19. Athletics PNG Secretary Philip Rehder said that it’s a well known fact that running cross country gives athletes a good foundation for a track season so we look forward to seeing what Poro can do next year. Her team mates at South Plains College Shirley Vunatup and Naomi Kerari are also preparing for the indoor track season which will begin in earnest after Christmas.