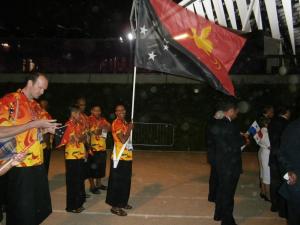 Toea Wisil will line up with the world best sprinters on Saturday at 11:40 am PNG time in Round One of the Women’s 100m at the Olympic Games in Rio. Wisil, who ran an Olympic qualifying time of 11.29 seconds in Fiji last month is exempted from the preliminary round which the non qualified athletes will run earlier in the day. It is not yet known exactly which athletes will feature in Wisil’s heat as the draw will only be made after the preliminaries, which will see a field of 24 athletes whittled down to 8 to go into the first round draw with Wisil and 64 other qualified athletes.

It seems certain that the PNG and Pacific Games champion sprinter will need to run a personal best time in order to advance to the semifinals and almost certainly better than 11.20 seconds. “With the fourteen top ranked athletes in the world this year under 11 seconds it’s going to be very tough, said Athletics PNG President Tony Green, but Toea’s mind will not be on the other athletes. She will be 100% focussed on her own race and on getting the sort of blistering start that has become her trademark”. The sort of start that was on show for the world to see in London 2012 when Toea led a top class field including Allyson Felix of the USA for almost 50m before eventually finishing fourth.  Felix went on to win three Olympic Gold in London.”

Reports from Toea’s husband and wife coach and management team Tony and Alison Fairweather are that she is a more confident athlete than in 2012 and has worked really hard on being able to finish her races better. “Toea is feeling good and very positive reported Alison yesterday. She is really looking forward to the challenge”.