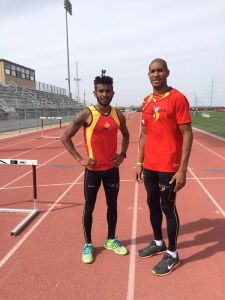 A very close contest is in progress for the one place available for a male athlete in track and field athletics  at the Olympic Games in Rio. With Nelson Stone out of contention due to injury it is now a two horse race between sprinter Theo Piniau and veteran 400m hurdler Mowen Boino. The deadline day is June 19 and that is when Athletics PNG will nominate to the PNG Olympic Committee the athlete who has the best performance. This will be determined by reference to the IAAF Scoring tables which are an internationally recognized method of comparing performance in different events.

Boino currently leads the race with his time of 52.03 seconds in the 400m hurdles which is worth 1031 points on the tables.  Piniau’s best performance is 21.39 seconds for the 200m and that is worth 1018 points. With the US College season now over and with no more relay duties, the youngster from East New Britain can fully focus on his dream of making it to his first Olympic Games whereas Boino is aiming to make up for the disappointment of missing out on his fourth Games in 2012.

Recognized pair will meet up on Thursday morning US time in the Sunshine State of Florida for a series of meets in the Miami/Fort Lauderdale area starting with the first of the Sunshine Invitational Sprint Series meets this Saturday at the University of Miami Cobb Stadium. This will be followed by the Star Athletics Sprint Series at Montverde on June 11 which is expected to be huge, and possibly a race at Jacksonville on June 12. The final meet will be at Cardinal Newman on June 18. With athletes from the USA, Canada and the Caribbean looking for Olympic qualifiers these meets are expected to be very competitive. Philadelphia based coach Dior Lowry who has worked with a number of US based PNG athletes in the past couple of years and accompanied the PNG team to the IAAF World Relay Championships last year will manage the two athletes in Florida and provide any coaching assistance they require.