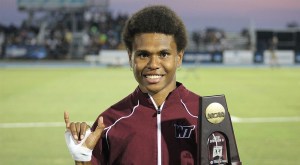 It was raining PNG National Records at the NCAA Division I National Championships in Bradenton Florida last weekend as all three PNG athletes who participated in individual events set new records. Rellie Kaputin placed second in the triple jump as she improved her own record of 12.78m with a final round leap of 12.82m.This came just 24 hours after she had set a new long jump record of 6.10m and Adrine Monagi had broken the 25 year old national record in the heptathlon.On the final day of competition Peniel Richard set a new mark of 15.35m to improve by 5cm the triple record which he shared with Mong Tavol. Not to be outdone by his team mates , Theo Piniau set a blistering first lap in the 4*400m relay final to put his team in a strong position right behind the eventual winners. His West Texas A&M team finished third with an outstanding 3min 07.56 seconds. Kaputin’s outstanding performances in the three jumps earned 14 of the 36 points accumulated by her team which finished in fourth place overall, an historic achievement for the team.