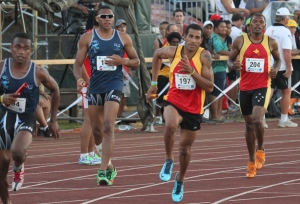 In releasing the names Secretary Philip Rehder said that the aim was to send a strong team but to give priority to the home based athletes and the top junior athletes with an eye on the future. “We need to provide some incentives and motivation for those athletes who did well for us at the Pacific Games and our priority is those  athletes with proven ability who have been training seriously for six months or more “ said Rehder. We also have some good junior athletes  based overseas like Miriam Peni and Afure Adah who are an important part of our squad for the future and these championships are an opportunity for these athletes to spend time with the team.

The athletes selected are

Rehder said that APNG wanted to advise these athletes now of their selection so they can begin planning their travel and that further athletes will be added to the team following the national championship. However that will be too late for anyone who doesn’t already have a passport. Funding is a consideration as always and as a result of the difficult climate we currently face, we will not be selecting large numbers of developmental athletes. Only the very best up and coming junior athletes are being considered”. Rehder also stressed the importance of competition results being submitted to Athletics PNG. Monica Henao has been appointed Team manageress and an announcement will be made soon regarding coaches.

The Melanesian Championships was first held in Fiji in 2001 and was held in Lae in 2003 and 2005 before the Oceania Athletic association changed its competition structure and abandoned the sub regional concept. However this competition is being re introduced this year and the 2016 event will include athletes from Fiji, PNG, Solomon Islands, Vanuatu, Norfolk Island, Regional Australia, Tuvalu, New Caledonia and Kiribati.