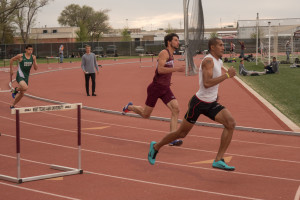 The coming week is a big one for the three male athletes vying for the one place that PNG is allocated in track and field for the Olympic Games under universality rules. Mowen Boino leap frogged Theo Piniau in the ranking lists on Saturday following an improved performance in the 400m hurdles. The three time Olympian clocked 52.33 seconds in New Mexico on Saturday which is worth just a few more points than the 21.39 seconds Piniau ran in the 200m earlier this month. The IAAF scoring tables are an internationally recognised method of comparing performances in different events and the faster that an athlete runs, the more points  his performance will be worth on the tables. PNG will select the athlete who has the highest ranking performance on the tables by June 19.

Nelson Stone, who has not had a good year so far heads to Singapore tomorrow (Tuesday) for the Singapore Open Championships where he will be hoping to get himself into contention with good times in the 200m and 400m. A total of 28 athletes have nominated for the 200m including Muhammad Rozikin from Indonesia who has a best time this year of 21.41 secs. However there are a number of other Indonesians as well as athletes from Malaysia, Brunei and Singapore in the field whose form is not know. The 400m looks to be a strong field with Philippines representative Edgardo Alegan Jnr the fastest with 46.95 secs plus a 47.21 runner from Indonesia and a 47.28 runner from Hong Kong. The competition kicks off on Thursday morning with the 400m heats at 11am and the final at 6pm. The 200m event will be on Friday.