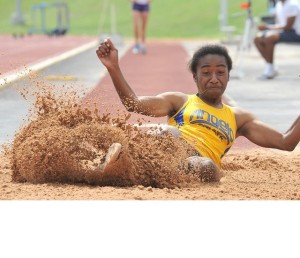 Nine PNG athletes based in Texas will be in action Wednesday night (Thursday png time)at the Oliver Jackson Twilight meet hosted by Abilene Christian University. It is expected that weather conditions will be more favourable than during the last competition there on April 9 when Mowen Boino, Shirley Vunatup and Poro Gahakave competed in cold and windy conditions. Boino is expected to get good competition this time around as the field in the 400m hurdles is stronger than at the last couple of races where he has won.Theo Piniau will race in a quality 400m field that includes a 46.30 runner and  several  others capable of low 47 second times. Rellie Kaputin will focus exclusively on her high jump at this competition having already proved herself outstanding in both horizontal jumps and Sharon Kwarula will be part of a quality 100m hurdles field.

Adrine Monagi and Peniel Richard, like Piniau and Kaputin have a big Meet next week representing their respective Universities in the Lone Star Conference Championships and will be using this competition as their last hit out before that. Monagi  will take part in the Javelin , high jump and 4*400m relay in her last competition before aiming for the PNG National Heptathlon record next week at the Conference Meet. Vunatup , who has been showing good form in the 400m this season gets an endurance test in her first ever 800m race which her coaches are hoping will be good preparation for her part in the 4*400m relay. Gahekave will also be using this meet as part of her preparations for the Junior College Nationals where she has already qualified for the 5000m and 3000m steeplechase and will run the 1500m. Her South Plains College team mate and Pacific Games high jump silver medallist  Naomi Kerari  whose season has been hampered by  an ankle injury will take part in the long jump.